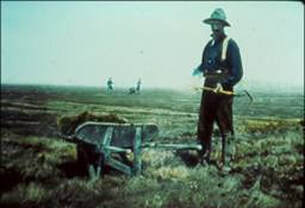 As early as 1627, it was realized that something had to be done about warding off mosquitoes to make New Jersey a more inhabitable territory. Early settlers would have “wet-wood” fires burning in the evening in front of their homes, so that the gusts of smoke would dispel the mosquitoes. People would actually wear handkerchiefs to cover their nose and mouth to keep from breathing in the mosquitoes.

It was not until just before the turn of the century that some people began to give some serious thought to New Jersey’s mosquito problem. As a result of the established connection between malaria, yellow fever, and mosquitoes in 1900; Dr. Smith secured a small amount of money for a preliminary investigation of the mosquito. On June 27, 1901, Dr. Smith sent out his first questionnaire to the various Boards of Health throughout the state. Finally, on March 12, 1912 the law calling for the establishment of county mosquito commissions was approved by the Senate and General Assembly of the State of New Jersey. The Ocean County Mosquito Extermination Commission was established in 1913.

The first control was begun in the County in the form of ditching by contracted labor. This work was supervised by the State Inspector. The Budget for that first year was $6,000; $3,000 which was supplied by the County and the other $3,000 came from the State.  The Commission appointed its first Superintendent, Stephen Johnson, in May of 1916, and he remained in that position until his death in 1950.  The majority of the hand labor ditching work done in those early days was still contracted out, but the Commission was beginning to establish its own work crews for the cleaning of ditches.
The Commission grew steadily over the next twenty years and formed many new practices including:
​On July 10, 1945, Island Beach State park in Ocean County witnessed one of the first aerial spray tests of DDT mixed with kerosene conducted on adult mosquitoes performed by the military. The Ocean County Mosquito Commission felt that more studies needed to be conducted on the use of these chemicals, but that year people began petitioning for the use of insecticides. A year later, the Commission began spraying catch basins and by 1948 through State Aid, aerial sprays began to combat the adult mosquito population. Additionally, most of the townships developed their own ground fogging programs.
The amphibious machines developed during War II became such an incredible asset to the Commission that by 1953 the hand labor crew was discontinued. In 1956, the State of New Jersey set up The State Mosquito Control Commission.

In 1959, New Jersey had an Eastern Equine encephalitis outbreak. In Ocean County, there were 18 known cases with 10 deaths. The Mosquito Commission requested all municipalities to do nightly ground-fogging in conjunction with daily airsprays. A campaign was launched to encourage and educate residents to help get rid of all breeding spots on their individual property. By 1960, no cases of encephalitis were reported as a result of diligent and effective mosquito control.

In 1969, three years before DDT was banned by the State and Federal governments, the Commission switched to safer and more environmentally sound agents.

In 1970, the Commission upgraded the program with the addition of helicopters and the development of Open Marsh Water Management system of permanent control which is still in use today.  During the mosquito season (March through October), our Inspectors continuously check known breeding sites by helicopter and truck. If the areas are found to be breeding, they are treated with a non-persistent larvicide.  In an average season the Commission treats approximately 65,000 acres of breeding area. Much of this work is done by helicopter on the 28,000 acres of salt marsh in the county. This area is the home of the Saltmarsh Mosquito, Aedes sollicitans, which is known to migrate to areas as far west as New Egypt. This species makes up much of the mosquito complaints in the county.  Eggs deposited on mud in saltmarshes are flooded by water from rains or high tides. Then they hatch into larvae or "wigglers" and live their early life swimming in this water.
Our water management program utilizes the breeding information obtained by the larviciding program to isolate the heaviest areas and subject them to Open Marsh Water Management. This is a system researched and devised by Mosquito Commission in the southern counties of New Jersey, Rutgers University, and the New Jersey Division of Fish and Wildlife. It controls mosquitoes in the larval stage by either increasing tidal flow or providing killifish and other natural predators to access larvae.  The Commission uses several pieces of specialized equipment to accomplish this water management. In 1976, the Commission was one of the first to acquire an Amphibious Rotary Ditcher. It is the latest design used to work in the ecologically sensitive salt marshes.

The Commission also runs a comprehensive surveillance system, which helps us keep the adult mosquito populations monitored at all times. We run a county-wide network of trapping and landing rate counts to determine the size and species make-up of our population. Through the years several new species of mosquitoes have been found and included with the over 40 mosquito species found in Ocean County. Culex tarsalis in 1975, Aedes japonicus and Aedes albopictus in 1999. All of this data is cumulated and is analyzed to determine areas that would require emergency adulticiding airsprays by the state.

Live mosquitoes are returned to our Entomology Lab where they are dissected to determine the disease potential of that population. These techniques are one of the contributing factors in the elimination of Malaria since 1950 and the extremely reduced cases of encephalitis.

In 1999, West Nile Virus was introduced to our country for the first time. Identified by a veterinarian at the Bronx zoo in birds, it eventually was found in the bird and human population throughout the New York metro area that year. In the years since it has spread throughout the country and has become another endemic mosquito borne disease in our country. Since finding this virus in our area, the Ocean County Mosquito Commission has restructured our disease surveillance program to also monitor and respond to this disease.

Mosquitoes are still a nuisance, but conditions today are far less extreme then the time that Ocean County was considered uninhabitable. This is thanks to that first group of men who formed the Ocean County Mosquito Extermination Commission in 1913 and the dedicated hard working men and women who have worked throughout the years in the fight against the mosquito.
​
Today, we are still utilizing the basics established by the original mosquito control workers.