Over the years there have been many introductions of species of mosquitoes from around the world into the United States.  Some of these species have made their way into New Jersey and Ocean County.  Some species inhabiting our area is short lived because of incompatibility with our climate or competition from our native species.  Two examples of this are Aedes aegypti, the mosquito that transmits the Zika virus, Yellow Fever and Dengue from the tropics and subtropics; and Culex tarsalis found in the western United States.  Aedes aegypti is not able to withstand the change in seasons with colder winters.  Culex tarsalis has trouble competing for habitat and resources with our most common native mosquito, Culex salinarius.

Two recent introductions to our country that have been able to flourish here in our area are:  Aedes albopictus and Aedes japonicus.  The discovery of Aedes japonicus was first made by the Ocean County Mosquito Commission employees Mike Romanowski and Steve Longo, and the Suffolk County Mosquito Control on Long Island NY in 1999.  Since then this species of mosquito has spread throughout the country. This mosquito has not proven to be any more troublesome then our native species.
​Aedes albopictus, also known as the 'Asian Tiger Mosquito' has proven to be quite troublesome.  In 1985, the first substantial breeding population of the Asian Tiger Mosquito was found near a tire dump in Houston, TX by the Harris County Mosquito Control Agency.  It was found that the tires in that area had been imported into this country from Asia, and with them came the mosquito eggs. This mosquito quickly spread throughout the country, taking 11 years to get to New Jersey.  On July 31st 1995, the first was found by Monmouth County Mosquito Commission in Keyport. Later that year it was also found in Cumberland and Salem counties.  In 1996, it was found in Burlington and Atlantic Counties. In 1999, we finally found them in Ocean County.  The first ones appeared to arrive from Monmouth County in tires that were transported from Keyport to a Lakewood tire recycling plant.  Of all the introduced species of mosquitoes so far, Aedes albopictus has been the most difficult to manage.  Due to their prolific breeding habits and their secretive lifestyle, everyone in Ocean County is unfortunately familiar with this mosquito.  They are aggressive biters ​that prefer Humans as their primary host. 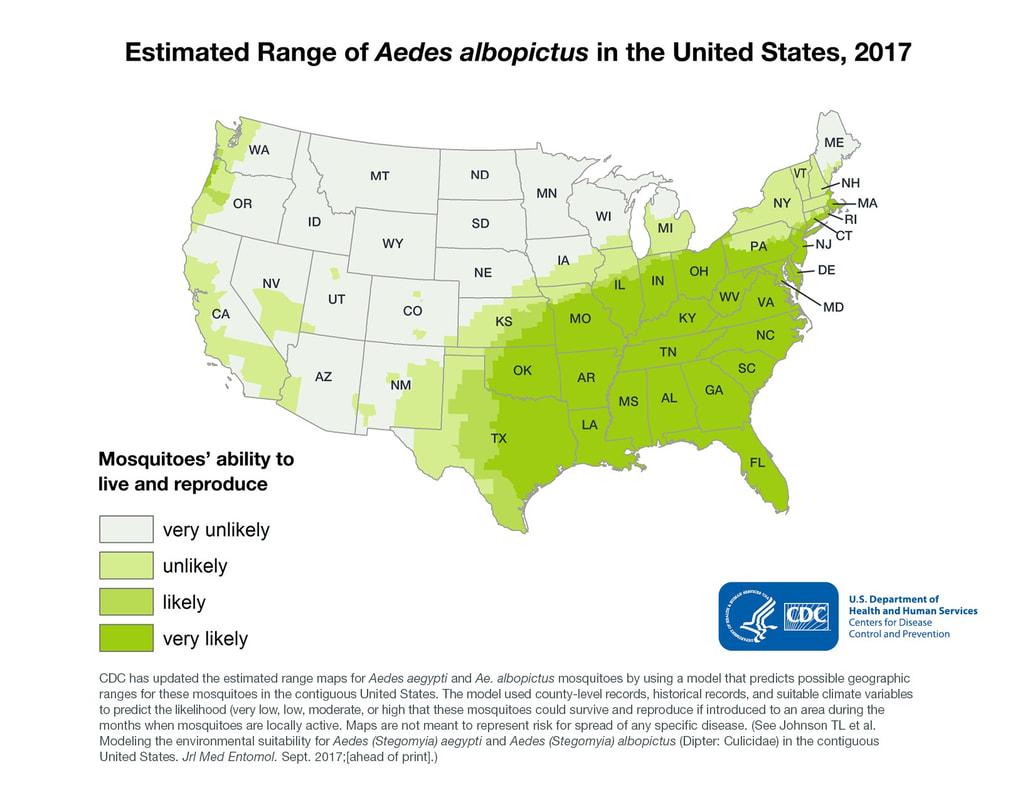 The Problem
The Asian Tiger Mosquito has proven to be much more difficult to control than any of our native mosquito species.  None of the traditional control techniques such as;  water management, larval spraying, or adult mosquito spraying have been successful.  These mosquitoes are considered to be "container breeders"  which usually includes species that breed in tree holes, tires, and artificial containers.  The difference with this mosquito is the small size and varied types of containers that they are able to breed in.  They are a suburban and urban pest and breed in anything that holds water in residential yards and businesses.  They have been known to breed in water habitats as small as a water bottle cap and can produce thousands of offspring from that cap.  They are able to breed equally successful at home with a well maintained and landscaped yard or an un-kept trash filled yard.  They seem to be able to find some type of habitat to their liking no matter where they are.

Our most common method of control, mosquito larviciding, is ineffective because their breeding habitat is so widely dispersed and usually hidden or secluded.   These habitats are most often inaccessible or on private property.   Most of our native mosquito species larvae are found concentrated in a limited type of habitat, like the wetlands, that can be treated with a minimal amount of larvicide.  The Asian Tiger Mosquito spreads its eggs out over many thousands of micro-habitats in and around residential areas where it would not be possible for us to treat.
Adult mosquito spraying has also been found to be ineffective.  The  "Asian Tiger Mosquito" spends most of their time resting in very secluded areas of people back yards, protected by shrubbery, under decks, and shielded by homes.  This mosquito is also not very active unless disturbed or actively looking for a host.
Unconventional but Effective Breeding Locations for Aedes albopictus
------------->  What Can Be Done?
The most productive mosquito control technique for the "Asian Tiger Mosquito" so far has been a process called Source Reduction.  The actual searching out and removal of all the available habitats in an area that the mosquito can breed in.  This is no small task since the mosquito can travel several blocks from where they were hatched, laying their eggs in any available source during their travels.  This requires the cooperation and diligence of many property owners working together to keep the neighborhood free of these pests, and reporting any abandoned homes, unkept pools, or out of code properties to the proper outlets.  Since the mosquitoes produced on one persons property could potentially affect an entire neighborhood, neighbors must work together and everyone much get involved to eliminate as many breeding sites for these mosquitoes as possible in as wide an area as possible. 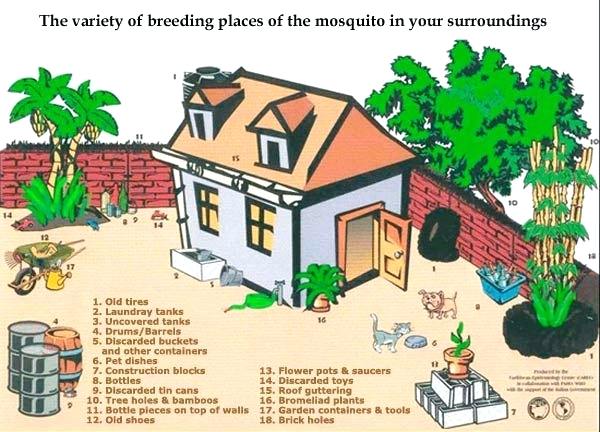